Regardless of which eschatological doctrine you follow, the end is nigh. Well, it's very nearly nigh. I think I see it on the horizon. I hear that Iran is making Nuclear Weapons and that some politician are trying to get an oil pipeline built that would start in Canada and go through the US. A guy standing on a corner told me so!

In any case, knowing how to survive the [insert your personal Apocalypse theory here] will be important. But shouldn't you also know how to make the best of the Newest World Order? 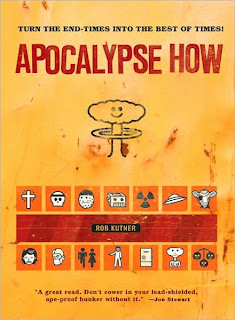 Enter Rob Kutner's book Apocalypse How: Turn the End-Times Into the Best of Times.

Kutner puts a positive spin on what could be the biggest negative ever. Sartre says Hell is other people? This Hell on Earth has far fewer humans! If you have been putting off working toward a more Zen lifestyle, you will wait no more! Simplicity has been handed to you by The Ratmen of Planet Arabesque.

Apocalypse How covers a range of topics and techniques that will be essential to thriving in the post-apocalyptic ruin of the world as we know it.

Make no mistake: this is a humorous look at the time after the End of Times. A veteran of The Daily Show with Jon Stewart and The Tonight Show with Conan O'Brien, Kutner currently writes for Conan on TBS.  Apocalypse How lives up to his comedic writing past, present, and future.

For more information about Rob Kutner visit his official website http://www.robkutner.com/ or follow him on Twitter. More reviews and information regarding Apocalypse How can be found at http://apocalypsehowthebook.com/.

Oh, and based on that whole Hopi thing (page 16) about iron snakes, rivers of stones, and the world being covered in a giant spider web, I'd get reading now rather than later. Iron snakes could be train tracks. Rivers of stone, roadways. Giant spider web? The World Wide Web. Just saying.