Recreation in Times of Desperation


The world is ending. The electricity has gone out. Batteries are scarce. And you are bored out of your ever loving mind.

There is no internet. No consoles. Batteries are too rare and needed too much for flashlights to use in a handheld system. No CD players. No MP3s. No Nooks, Kindles, or Whathaveyous. TV? No. OMG, the world is…wait. Right.

Seriously though: what the hell are you going to do?

Merkez had always known that he would see the end of the world. No fortune teller nor soothsayer nor bones thrower had told him. None had had to. He’d just known.

However, he had always rather thought it would be, well, more exciting. His whole life he had prepared himself for the inevitable invasion of aliens, meteors falling from the sky, war of wars and all the other horrors his demented little brain could think up.

But it didn’t happen that way at all.

Recycle? Are you kidding? I want EVERYTHING New!

Lately it seems that everyone is recycling. More and more companies around the globe are Going Green every day. Admittedly, some are probably just re-branding themselves without changing a gosh darned thing, but most are at least making a real effort. No matter how large or how small or what the motivation, they are trying.

So what? Since the Apocalypse is inevitable, recycling sort of seems like a waste of time and energy. Who cares what state the Earth is in in 100 years? Either we’ll all be dead or enslaved by giant rats who are themselves controlled by giant diseased fleas from outer space. And don’t go thinking that those outer space blood suckers will be kind masters who love their obedient slaves.

Read more »
Posted by HJR at 9:36 PM No comments: Links to this post 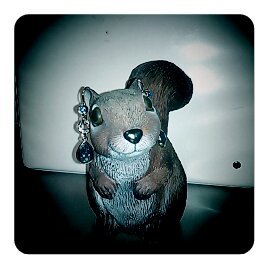 If you are like me, you have pets and love them dearly. But when that End of Ends happens, what will happen to them?

I’m not talking about who will take care of them. There are services that employ certified Atheists who are more than willing to take care of our pets – for a fee – after the Rapture. You know, if we were going to get raptured that is (especially since it keeps getting rescheduled).

When the skies open and Jupitarian Octomonkeys descend upon our unsuspecting world, should we keep our beloved furry family members with us or not? They are cute, cuddly, comforts now. But what will happen when the Octomonkeys attack?

To properly assess our options, we should look at this in regards to pros and cons.