Darling! It's been so very long! 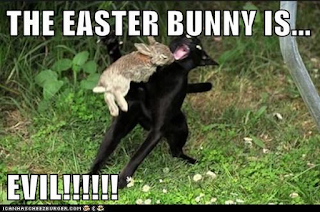 I hope you've been having a lovely year.

During the time since my last post, I've been thinking a lot about what constitutes an Apocalypse.

The word invokes images of fire raining down from the sky, Marlon Brando, and bunnies. It screams of the ground opening up to swallow cities. It bellows about the oceans flooding to reclaim entire swaths of land. It screeches about missiles and bombs.

The dictionary says it's "any universal or widespread destruction or disaster." But it also says apocalypse is "any revelation or prophecy" or "a prophetic revelation, especially concerning a cataclysm in which the forces of good permanently triumph over the forces of evil."

So, does an apocalypse have to be universal? The dictionary seems conflicted since it says yes but also says it could be any revelation or prophecy.

I have come to believe that the any revelation definition is more appropriate. Everyone has a personal apocalypse that she has fought through. Some of us survive. Some of us do not.

Because of these musings, I am going to take the blog in some different directions. I will still research and write about how to defeat those more unlikely foes, but the blog's focus will include more problems we face every day.

I have some ideas for topics, but would like to know what you want to read about. Email me at hjr @ anypocalypse dot com or hit me up on Twitter with your suggestions.